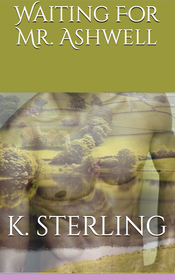 Waiting For Mr. Ashwell will always occupy a very special place in my heart. This was me, dipping my toe into M/M erotica. Ned and Ash are soul mates and their love is so timeless. And they are adorable. Ned is impish, passionate and completely devoted to Ash. Ash is restrained, battle-scarred and endlessly patient. Unfortunately, they exist in a time and place where their love is quite taboo.


It begins with a revelation and a kiss…

“Have you kissed a man?” Ned asked and Ash shook his head again.
“I’ve barely kissed a woman, Ned. I tried once and it was miserable. I lasted about ten seconds before I panicked and ran.” He groaned as he swiveled his neck. Every muscle in his body was tightening and the room felt too hot. He looked up at Ned and found him smiling down at him.
“Would you like to kiss me?” His voice was smooth and low. It curled through Ash and he felt his body rising from the chair.
“Oh, God, yes!” Ash whispered as he stepped toward him. Ned pushed from the table and Ash stopped just before their bodies touched. He knew his body was shaking but he couldn’t feel it. He was just a pounding heart and a painfully throbbing cock. And lips. His lips felt like they were on fire. Ash inhaled and the smell of Ned flooded him. Bergamot, citrus, tea and scotch. It was heaven and his mouth watered. They were almost the same height and he could feel Ned’s breath against his lips. He was afraid to move, to touch him. He didn’t want it to end and he was sure that as soon as any part of his body touched Ned’s he’d wake up. Or die. He took a deep breath and it shuddered through him. “Ned, you have no idea…” His voice broke and he felt his eyes watering. He saw Ned swallow and his lips curved gently. They were so close Ash could almost feel it against his lips.
“I swear, I do, Ash,” Ned whispered. The words were hot and moist and Ash licked his lips. He tasted them and his erection throbbed. Ned’s pupils dilated and his head tilted forward. Ash held his breath and he felt Ned’s warm, soft lips brush against his. They dragged slowly from side to side and heat spilled through Ash. He raised his chin up and down just enough to make their lips part and cling. Ned’s hand fell tentatively on his shoulder and Ash groaned when he felt Ned’s tongue slide along his lips. He raised his hand to cradle Ned’s jaw but it shook and hovered in the air next to his face. Ash felt Ned’s hand press against his, guiding his hand to his face. As soon as it connected with Ned’s skin, need exploded within Ash. He growled and angled his head as he opened his lips and his tongue slid against Ned’s. He tasted like scotch and something crisp and it made Ash’s head spin. His tongue was everywhere in Ned’s mouth, trying to learn every new texture and taste. He felt Ned’s hand squeeze his shoulder and pull him closer.
Their bodies connected and Ned sighed into his mouth. It made Ash desperate. He pushed his hand into Ned’s hair and he moaned in delight when he felt the cool, silk soft strands around his fingers. His hands started moving; from Ned’s hair to his face, his arm, his neck, his chest, his back… Ash was still too afraid to touch him below the waist and he tried to keep his groin from touching Ned’s. He didn’t want to lose control and maul him or spill himself in his pants. Ned’s hand was under his coat and fisted in his shirt, locking Ash against him as their tongues dueled.

Sometimes, love is patient. Then, there are the times it isn’t…

“I’m happy, Ned,” Ash whispered and Ned smiled. “And tired,” Ash mumbled. Ned nodded and his head turned toward Ash.
“No more holding back, Ash. Just let it happen,” Ned said as he pulled Ash’s hand to his lips. Ash felt his lips turn down.
“Ned… I don’t want to hold back anymore. I want to give you everything, and I will. But I still think we should take the physical part slow.” He saw that Ned was about to protest and he pressed his hand over his mouth. Ned’s eyes flared and Ash couldn't keep from smiling. “I love that you’re so curious and open. God, I love it! But some of the things you want to try could hurt if we rush. We both have a lot to learn and you might not like everything.” Ash looked at Ned pointedly as he blinked up at him. Ash was tempted to keep his hand where it was but Ned moaned impatiently. Ash raised his hand and Ned opened his mouth to speak. Ash couldn’t help himself, he let his hand fall before Ned could get a word out. Ned’s eyes narrowed and Ash laughed. It felt amazing. Ned licked his hand and Ash raised it and pressed it to Ned’s cheek.
“No,” Ned argued. “I want us to do what feels right in the moment. You won’t hurt me. I don't want anything to come between us anymore. I want to lock you in my room and do everything in that book, twice. All I can think about is having you inside of me and being inside of you and I just can’t see how that won’t be incredible, Ash.” Ned’s eyes searched his and Ash could only nod. Every time Ash caught his breath mentally, Ned would steal it from him. Every time he thought he couldn’t love or want Ned more, he proved him wrong. “Tonight, you’ll do whatever you want to me and you’ll show me how to please you. Along the way, I’ll try things I think I might like. It should be a ripping good time,” Ned declared. Ash had to clench his jaw to keep from smiling. He raised a brow as he looked down at Ned.
“A ripping good time?” He said slowly. Ned cringed.
“That was a poor choice of words. But you know what I mean. It’ll be smashing.” Ned grinned mischievously as Ash shook his head.
“Not better,” Ash grumbled. Ned’s lips twisted as he thought.
“Cracking?” Ned offered. Ash shook his head again.
“Definitely not,” Ash said. Ned bit his lip as he considered.
“Banging?” Ned tried.
“Stop.”

Did I mention that they’re adorable?

“We’re going hunting!” Ned announced as he fell onto the couch. Ash looked up from his book and raised a brow.
“Hunting?” He rumbled as he set his book in his lap and Ned nodded decisively.
“Hunting: Stomping about the woods like a savage and killing woodland creatures,” he said and Ash looked at him patronizingly.
“You don’t hunt, Ned,” he replied and Ned grinned mischievously.
“I might, while at my grandfather’s hunting cabin.” Ned looked at Ash pointedly. Ash nodded thoughtfully.
“Ah. You mean the luxurious, four bedroom cottage your grandfather kept his mistresses in when your grandmother wouldn’t let him sneak off to Town,” he mumbled. Ned winked and looked very proud of himself.
“As we speak, I’ve got people out there airing it out and stocking it with everything we need for at least a week.” Ned was about to recline when Ash sighed and stood up. Ned frowned as Ash buttoned his coat and made for the door. “Where are you going?” Ned called after him. Ash turned and crossed his arms over his chest as he stared down at Ned.
“To get the guns. Do you have anyone preparing those?” Ash looked at Ned expectantly. Ned cringed and rubbed his jaw.
“Right. We might need those. Because we’re going hunting.” He smiled sheepishly and Ash shook his head.
“Or were you intending to chase the woodland creatures down and kill them with your bare hands?” He raised his brows but kept the rest of his face straight. Ned’s face twisted.
“That’s barbaric. I’m going to take plenty of my finest scotch and lots of romantic poetry.” He jumped to his feet and went to the bookshelf. Ash snorted in disbelief and turned on his heel.
“No Shakespeare,” Ash declared as he strode from the room.