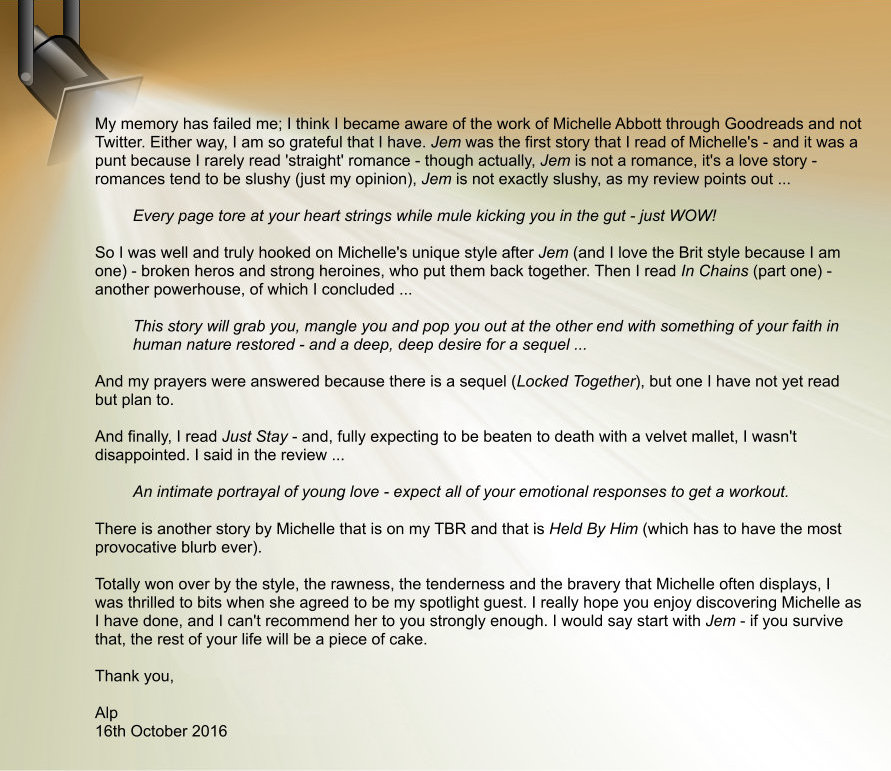 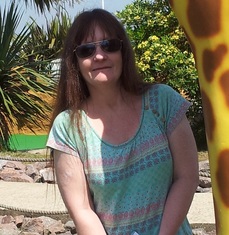 ​Michelle Abbott lives in the UK and hates describing herself in third person.

She loves to write new adult romance with flawed heroes who are protective of their girl.

She's an avid reader of romance, is addicted to coffee and loves wine and chocolate, so yeah, not the most healthy eating and drinking habits :-) She spends way too much time online when she should be writing. She collects teddy bears and occasionally knits a couple of rows on a sweater she started years ago, which she may eventually finish in time to wear for her funeral :-)
Social media links:
Blog:  http://michelle-abbott.weebly.com/
Twitter:  http://twitter.com/MichelleAbbott4
Facebook:  http://www.facebook.com/MichelleAbbottRomanceAuthor 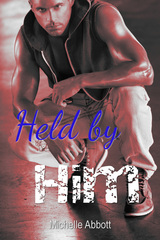 CALIN
I'm a master at controlling my feelings. I've had years of practice. My only release comes from cutting.
And pain. I like pain.
I don't get involved in kidnapping...usually. Now, thanks to my father, I have a redhead locked in a room and cuffed to the bed.
Not just any redhead, this one has a smart mouth, and she's a fighter. She fights me, and I love it.
She gets under my skin. She makes me feel.
She's my firecracker.
But, if her brother doesn't pay back the money he stole from us, I have to kill her.

MISTY
Drinking a cocktail that was laced with Rohypnol is the stupidest thing I've ever done.
But with an alcoholic for a father, and a drug addicted mother, I suppose intelligence was never going to be my strong suit.
Now, thanks to my idiot brother, I'm being held captive by a man who gets off on taunting and humiliating me.
A sadist.
I should be scared.
But he's making me feel things I've never felt before. He's doing things no one has done for me before.
I should be focusing on staying alive. Instead, I’m falling for a killer.
​​
View the Excerpt
​
Amazon.com:  https://www.amazon.com/dp/B01LZZQLXE
Amazon.co.uk:  https://www.amazon.co.uk/dp/B01LZZQLXE 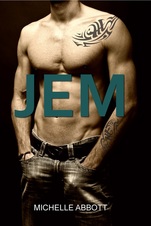 Two injured, stubborn souls meet unexpectedly. Will they save each other from their demons or have they been too damaged for too long to see past the pain?

Growing up, all Jem knew was hatred and the pain from his father's fists. Taunted by the kids at school, he was alone, until a girl with carrot coloured hair sat next to him.

She smiled.
She listened.
She cared.

She was his angel, and he knew he’d love her forever. But Jem’s father hurts him in a way he never expected by taking him away from her.

Now eighteen, scarred inside and out, Jem trusts no one and has worked hard to ensure he'll never be helpless again. But then he runs into his angel. The only problem is she doesn’t recognize him. Jem needs her to remember him, to show him that their time together meant to her what it did to him. For once in his life he wants to have mattered to someone, to her.

Devon is attracted to the muscular, tattooed, pierced hottie standing by the pub quiz machine. That is, until he punches a guy clean across the bar for daring to touch him. She’s had her fill of violent men and intends to avoid this one at all costs.
​
View the Excerpt 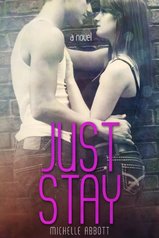 The last place Pia wants to be is on a family vacation in a sleepy Cornish village. She's anticipating two weeks of mind-numbing boredom. Then she meets Trey, a local boy. He's absolutely gorgeous. The trouble is — he knows it. He's arrogant and egotistical, and Pia intends to avoid him at all costs.

But Trey is not the kind of guy who gives up easily. When he sets his sights on Pia, her resistance is futile.

It's just a holiday romance, some light-hearted fun, right? But one of them is about to discover that still waters do, indeed, run deep. When what lurks beneath the surface finally erupts, the consequences may prove to be catastrophic.

A romance set in a world where slavery is government run and slaves are fitted with microchips.

Savannah, fleeing a turbulent relationship, seeks solace at her brother’s country farmhouse. It’s there that she meets Kayden; her brother’s slave who's considered less than human. These two damaged souls form an unbreakable bond, one that’s about to be tested, because Kayden is her brother’s property and he will stop at nothing to keep them apart.

This is book two in the In Chains series and continues the story of Kayden and Savannah. I would recommend reading book one in the series first.

She would do anything for him. Even throw away her freedom.

For Savannah, it was an easy choice; getting sent to the Compound meant she and Kayden could be together. But nothing is ever that simple. Caught in a system that encourages cruelty and mind games; will their love survive?