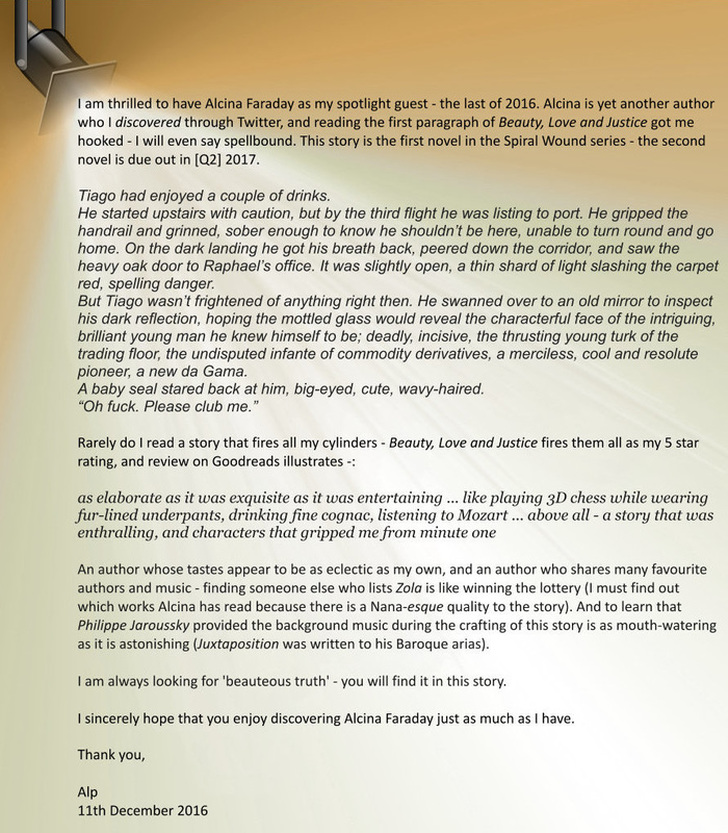 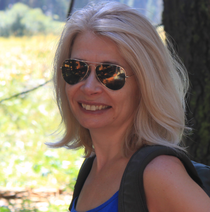 ​Alcina Faraday is a scientist, businesswoman and stepmother who writes literary fiction about the redeeming power of love and the disturbing possibilities of modern scientific reality.

She lives in London and Devon with her engineer husband and a small colony of palmate newts. 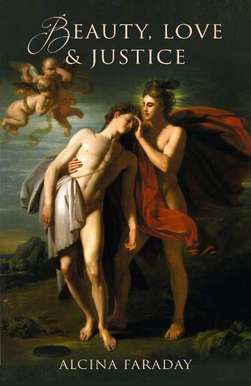 Tiago’s ruthless and rich. But he’s tired of the greed of corporate life.
The thrusting Adonis of the trading floor, he has ambitious plans that just might secure a halo to complement his angelic looks.

Raphael’s a slave to beauty with his own designs on the undeserving rich, and a suave exterior that belies a gentle – and recently broken – heart. But though Raphael’s in safe hands – his sister Clara and her husband Rob would lay down their lives to protect him – Tiago’s not so lucky. He’s a boy with a hidden past. And by unhappy coincidence, Raphael’s obsessive ex, cracked rocket scientist Tomas Paul Gosele, may know enough about that past to destroy everything.

Tiago clearly needs friends he can trust. His new neighbour Amelia Postthridge seems a nice enough girl, as eccentric scientists go. But Amelia is mad, bad and dangerous to know, and pursuing her own ambitious agenda. She’s going to win the Nobel Prize with the world’s ultimate apple, and she’ll happily chew Tiago up and spit out the pips to achieve her aim.
​
Beauty, Love and Justice may be in short supply for our hero in this climate of ambition and deceit – but when the heart speaks what’s a boy to do?

View the Excerpt
​​
Available from -:

Listen to Alcina read from Beauty, Love and Justice
Look for These Modern Girls coming in 2017

Sophia’s a Tesla Girl, a strong-minded and determined empiricist, the scourge of any man or woman foolish enough to disappoint her with shoddy workmanship or a feckless attitude at the Setubal car plant where she rules supreme and potty-mouthed as engineering manager. She’s happy with her ex-pat life in Lisbon until she meets Ines, a young doctor at the hospital, who opens her eyes to a life of the senses and the sensual.

With the help of a strange cadre of archaic craftsmen, the two girls fall in love in Lisbon during winter and spring; but when Ines’ cousin Tiago and his lover join them for a summer holiday at the family estate in the Alentejo, Sophia starts to realise that truth is more than fact.
​
If you like “Beauty, Love and Justice” you may like “These Modern Girls,” the second novel in the Spiral Wound series.