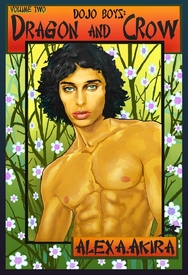 ​VIGILANTE YOSHIRO TANAKA AND MICHAEL MAKE LOVE
Reaching up, Michael smoothed his palms over the rippling ivory expanse of Yoshiro’s striated chest muscle. Taut nipples pebbled further wanting attention and he plucked and tugged the ruddy peaks, marveling at his lover’s Snow White coloring. What’s black and white and red all over? The nonsensical riddle was gobbled up by another surge of heat. Springing up to his elbows, Michael captured one of the fruity buds between his lips with a growl. Suckling and nipping one then the other, he synched with the rocking thrusts of his companion’s narrow hips rewarded by a sweet cloud of apricot essence that smothered his senses.

Apricot love … peach pearl lover … silky, salty-sweet shadow lover … love you, lover … Mmmuf ummmf… The silly litany danced the song in his heart as he savored the scented skin shivering sporadically beneath his licks. A rush of blood hit his nuts in an erratic pulse that swept to the head of his cock discharging another gush of nature’s lube. Michael groaned his euphoria against the heated nub, fighting to control his passion.

“Fuck! Get the fuck on me before I burst!” He nipped the tender flesh to punctuate his command.
​
Rising to his knees, pale thighs flexing about either side of Michael, Yoshiro gripped his lover’s slick girth and guided the glistening member to his pucker. He eased his ass around the rigid length wriggling until he was fully seated, releasing a series of ecstatic keens vaguely reminiscent of his lover’s name.  “Mmmuff … uff… M-mmich … elllll…” 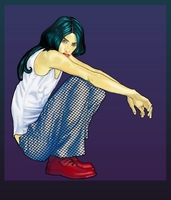 Electrified by the thrilling blaze enflaming his shaft at the animated cavity’s welcome, Michael shifted his thighs, raised his knees and levered his feet against the mattress. Ass cheeks flexing, he pumped up to meet his lover, lost in a place of apricot musk and wild rapture.  He collapsed his upper body to the bed, back arching up as his lashes fluttered down. Neck tendons straining he swallowed a groan of gratification, forced his focus to the job at hand and sent another savage thrust through his lover’s ass.
​
His fingers scrabbled to capture Yoshiro’s hips. Once caught, he synced his thrusts, reveling in the piston action of the man’s rippling thighs, second only to the talented ass, which massaged his cock like it was kneading dough. Yoshiro’s moist palms pushed off his upper chest and slid to his shoulders. Even in the throes of passion, Yoshiro had remembered his injuries. A surge of love sliced through Michael at the tender display increasing his passion tenfold. Slitting his eyes, he watched his lover ride him.