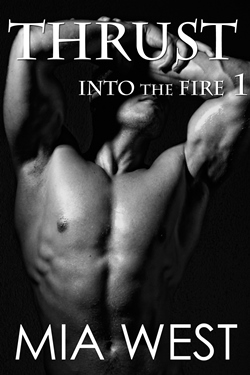 ​Marc didn’t step away. In fact, he remained where he stood, his dark eyes studying Wolf’s. Sunlight from the open door glanced off the hair at Marc’s temples, revealing silver strands among the black ones. A stubbly beard grew along his jaw, split to include a mustache over his lip. Soldiers didn’t wear beards.

“You need a shave,” Wolf said without thinking.

Marc’s lips drew back in that broken-tooth grin. “What would you know about shaving?”

“I shaved Matthias’s head every week.”

When had it begun to caress the hair on his cheek?

A quarter hour later, Marc sat on the bench, stripped to his waist. A pan of water steamed on the table. Matthias’s razor lay, edges gleaming, on the leather of its case. Wolf had given it a brief once-over with his finest-grained sharpening stones. He’d been lucky not to slice off a finger. His hands still trembled. He hoped he wouldn’t accidentally slit Marc’s throat.

He dipped a cloth in the hot water, squeezed out the excess and pressed it over Marc’s face and neck. The bones under his hands felt durable, reliable, and Wolf was grateful for them. Removing the cloth, he dug into the soap jar and rubbed it between his palms to soften it further. The soap didn’t lather, but once the fat melted he smoothed it over Marc’s jaw and upper lip. When he coated Marc’s throat, Marc swallowed, sending his Adam’s apple sliding against Wolf’s fingers, up then down.

He wanted to cup his hands protectively around Marc’s neck. Instead he drew them away and wiped them on the wet cloth.

Marc tipped his head until it came to rest against Wolf’s belt. Wolf took up the razor. Eyes dark as roasted chestnuts bore into him for a few seconds before Marc closed them.

Wolf started at his neck, drawing the blade up to Marc’s jaw. The strokes created clean stripes, one after another, with only one small knick. Wolf dabbed it with soap and moved on to the hard eave of the jaw. Soap clouded the pan of water. Bristly hair floated on the surface and coated the cloth Wolf used to wipe the razor clean.

When the time came to shave Marc’s face, Wolf eased the man’s head forward and straddled the bench to his left. Marc opened his eyes and watched the hearth as Wolf worked. With careful strokes, he gradually revealed the smooth planes of Marc’s face, as far as the corner of his mouth. Moving to Marc’s other side, Wolf repeated his downward scrapes of the blade until only the chin and lips remained to be tended. He turned Marc’s head to face him.

The force of the man’s gaze nearly knocked the razor from Wolf’s grasp. He couldn’t have said why—Marc’s eyes didn’t look any different, and he kept his face deliberately expressionless to make Wolf’s work easier. Perhaps it was only that he’d been looking away for some time, had had his eyes closed before that.

At any rate, Wolf hesitated, forgot what he should do next. Marc looked from one eye to the other and then pulled his lips into his mouth. The movement presented Wolf with smoother surfaces to shave and spurred him back into motion. He could feel Marc watching him as keenly as if the man were touching his face. He shaved Marc’s chin first, studiously ignoring the trickles of soapy water that slid down Marc’s naked chest, dampening the waist of his breeches. When Wolf finally finished shaving Marc’s upper lip, he used a second cloth to clean soap and hair from Marc’s skin.

Marc let his lips emerge again. Unobscured by beard, they looked full, a plush contrast to the harder angles of the bones under his skin. The shave had revealed a long, narrow scar down his left cheek. Unable to stop himself, Wolf traced it with a fingertip to the edge of Marc’s mouth. Those full lips parted, and the chest beneath rose on a breath. Wolf focused on the lips, on the dark space between them, willing it to happen, and then it did: Marc’s tongue flicked over his lower lip. It left behind a sheen of saliva that made the lip look like a piece of summer fruit. Wolf leaned forward and licked it.

Wolf rolled his tongue, trying to find Marc’s flavor on it, but found nothing discernible. In his peripheral vision something stood out on Marc’s neck. A small drop of blood had welled from the knick he’d made. Wolf dipped his head and licked it away as well. It tasted of metal dust and lye soap.

Marc’s hands came up, one landing on the table, the other on Wolf’s thigh. Wolf pressed his mouth to Marc’s throat, dragging his lower lip over the knick once more before straightening.

Marc’s eyes blazed at him now. The muscles of his throat contracted on a swallow, and his lips fell open again. His shoulders vibrated. Wolf placed his hands on either side of Marc’s face, as he had when calming his nightmares, and as he had done then, Marc grew still.

All but the hand on Wolf’s thigh. Its fingers gripped him, hard. Wolf thought of the oval bruises on his flanks. He wanted to get bruised again. He wanted to leave his own marks.