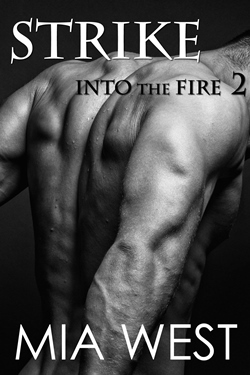 ​The thermal spring bubbled up into a small pool. It lay in a copse of birch trees, and the trampled look of the grass around the pool set Wolf immediately on edge. “Too many people,” he said.

“Not recently,” Marc said, pointing to a blackened circle in the ground nearby, a fire pit at least a month old, judging by the state of the ashes.

“Then keep watch,” Marc said. Dropping his pack, he began to pull off his boots.

“What are you doing?”

“Because you march like a new recruit. I, on the other hand, am fully thirty-seven years old.” He pulled off his shirt, then yanked at the laces of his breeches until they dropped to a heap around his ankles. He stepped out of them and into the hot pool, hissing at its heat.

“Suit yourself.” Marc stepped farther in and lowered his body slowly into the pool until he sat on its mossy basin. He leaned back against the edge with a groan. “The gods are good.”

Marc opened one eye to find Wolf glaring at him. “You should get in.”

Wolf scowled and scanned the surrounding trees. “No.”

“At least take off that pack.”

The smith grunted but slipped the straps from his shoulders, setting the pack near the fire pit. He drew the sword from his belt and walked the short perimeter of the clearing.

Marc closed his eyes, and for several minutes let the water’s heat seep into the weary muscles of his legs and back. Rome had built formal baths in the region, taking advantage of the natural springs to bring some of the civilization of the great city to its outposts. Marc supposed the army’s retreat wouldn’t necessarily have meant the closure of those baths, but he preferred to avoid large settlements on this trip west. Men known to be merely passing through became quick targets for thieves and worse. And the thugs bred by the cities wouldn’t hesitate to slit their throats for what they might carry in their packs.

Marc opened his eyes. Wolf still circled the clearing. “I’ll take a watch so you can get in.”

Marc bent to splash water onto his face and neck, and then dunked his head. When he rose, Wolf had stopped, watching him. Marc scrubbed under his arms and across his chest, enjoying how Wolf’s eyes tracked his hands. Marc reached down and scooped water into his crotch. He rubbed it roughly over his sac, ignoring the soreness from the day’s walking in favor of keeping Wolf’s avid attention. With long, explicit strokes Marc washed his cock.

Wolf knelt abruptly and rummaged through his pack. Retrieving a whetstone, he sat down and began to hone the edges of his newly acquired sword.
​
Amazon | All Romance | iBooks | B&N | Google Play | Kobo