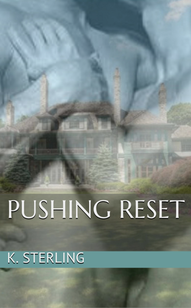 At the heart of Pushing Reset is the idea that families can be made of very different pieces. It begins with a man that has his already fragile world turned upside down by tragedy. Brandon has lost his wife to depression and suicide and is left to raise his toddler son on his own. Fortunately, we have Jude. Jude has been in love with Brandon since they were children and vows to help Brandon, no matter what it costs him. Jude keeps his feelings for Brandon safely tucked away and they settle into being an unorthodox little family.

Then, Brandon has a rather startling awakening.

The familiar sound of keys tinkling in the living room caught Brandon’s attention and he drifted across the hall and leaned against the doorframe. Jude had a pencil gripped between his teeth as his hands drifted lightly over the piano’s keys, applying the lightest pressure. Brandon grinned. Jude was keeping the music soft while Noah napped. Brandon was tempted to tell Jude that Noah would probably sleep through it, they were all so used to the sound of Jude playing. Brandon’s lips pulled tight as he realized how much they took that for granted. The house was always filled with beautiful music and they were so used to it, they barely heard it half the time. Brandon’s eyes clung to Jude and it was as if he was seeing him for the first time since they were kids. The muscles of his forearms twisted and stretched as he played and the fine cashmere of his v-neck pulled tight, hugging the muscles of his back. Something shifted within Brandon’s chest and he frowned. He’d always known that Jude was attractive but suddenly, he was beautiful. Somehow, Jude’s beauty had been a static thing, like the music.
Jude pushed a hand through his hair before he plucked the pencil from his lips and Brandon’s eyes couldn’t leave them. He swallowed hard as his body tightened and his frown deepened. What’s wrong with you? Jude’s always been good looking. Why are you suddenly shocked that he’s hot? He shook his head softly. Go rub one out. Clearly your head’s messed up, Brandon scolded. He must have made a sound because Jude’s head swung toward him and his lips pulled into a soft grin and Brandon’s eyes flared as a soft flutter tickled his stomach.
“What’s going on?” Jude asked and Brandon shook his head.
“Nothing. That was nice,” he said as he stepped back. “I was passing by and it caught my attention. But don’t let me distract you.” Brandon tried not to focus on Jude’s lips as his smile grew.
“Thanks, it came to me while I was helping Noah with his homework last night and it’s been stuck in my head,” Jude explained and Brandon nodded.
“I like it. I can’t wait to hear it when it’s done.” He turned and a tremor of guilt passed through him as he realized he meant it, probably for the first time in a long time.

“Are you on drugs?” Jude asked loudly as he grabbed Brandon’s arm. He held on tight as Brandon tugged and frowned as he stared at the inside of Brandon’s elbow. Do you even know what tracks look like? Jude wondered as he turned Brandon’s arm, trying to get more light on it.
“What are you doing?” Brandon’s voice was strained as he tried to pull away. Jude released his arm and grabbed Brandon’s face.
“I think you might be using drugs,” Jude announced as his thumbs pulled on Brandon’s lower eyelids. Is it normal for this to be so pink? I don’t even know what normal eyes look like. These just look really irritated and dry. Jude’s lips pulled tight as he tried to remember what the insides of his eyelids looked like. Brandon swatted his hands away and pulled his head back.
“And you think I’m keeping them under my eyeballs?” He grumbled as Jude leaned forward and sniffed. “Get the fuck off of me,” Brandon ordered as he stepped around his chair and backed away. “I’m not using drugs,” he declared angrily and Jude’s eyes narrowed as he studied Brandon.
“You’d say that if you were,” he argued and Brandon raised a brow.
“Are you on drugs?” He asked and Jude snorted.
“Don’t turn this around on me,” he warned as he advanced. “It would explain everything,” Jude insisted and Brandon held his arms out, holding Jude off.
“Stop!” He looked terrified as his back hit the bookshelf and Jude gave him an expectant look as he took another step. Brandon cleared his throat and tugged at his collar. “I swear, I’m not on drugs. You know me, I can’t even take Sudafed without freaking out.” His eyes were pleading and Jude’s lips pursed as he considered.
“That’s true…” He scratched his jaw as he considered. “But you’ve been acting really odd lately,” Jude said and Brandon scowled.
“Can’t I just be in a bad mood now and then without you attacking me and accusing me of using drugs?” Brandon asked and Jude raised his hand and pointed at Brandon.
“I know when you’re just in a bad mood and this is different. Something’s wrong and for some reason, you refuse to talk to me about it,” he said and Brandon shrugged.
“Or, maybe you’re making a big deal out of nothing. Maybe I’m just not in the mood to talk,” Brandon said defensively and Jude squeezed his temples and sighed.
“Whatever it is, Brandon, we can deal with it. If it’s drugs or maybe you need to see a therapist because you’re depressed, I won’t judge you and I’m here,” Jude promised and Brandon groaned as he threw his hands up.
“I’m not using drugs and I swear I’m not depressed,” Brandon insisted and his face became taut. “After years of begging Emma to get help and seeing what can happen if you don’t, that’s the last thing you have to worry about, Jude.” He leaned back against the shelves and Jude nodded as he stepped closer.
“I’m sorry. I just don’t want you to feel like you’re alone and you’ve had me worried lately,” Jude said as he reached for Brandon to give him a hug. Brandon pressed himself against the shelves and shook his head frantically.
“No!” It was shrill and he was petrified. Jude’s head pulled back in confusion and Brandon waved him off. “You’re half naked and sweaty,” he complained and Jude rolled his eyes.
“Dude, I don’t have cooties,” Jude shook his head as he turned to go. “Whatever. Don’t do drugs and stop being an asshole.” He waved over his shoulder before he left the room.
It wasn’t really a resolution but Jude prayed that whatever was going on with Brandon would pass  or he’d open up and talk about it. All Jude could do was be patient and hope for the best. For the time being. At some point, Jude was prepared to kick Brandon in the balls and tell him to “knock it the fuck off”.


Eventually, they figure it out.

“You’re so beautiful.” Brandon’s voice was heavy and thick with awe. Jude was grateful he was laying down, his skin prickled and he felt lightheaded, the relief was so overwhelming. “Can I touch you?” Brandon asked softly but the words nearly shattered Jude.
Oh, dear God… Jude nodded despite the strong urge to jump from the bed. He didn't know how he would cope with Brandon touching his bare skin. Jude watched as Brandon lifted his hand to his throat and bit back a groan as he felt fingertips pressing against his skin. He squeezed his eyes shut and focused on breathing as Brandon’s fingers slid over his collarbone. Oh, God, oh God, oh God… What is he made of? How can his fingers be this hot? Jude complained silently, desperately, then cringed as he heard a soft moan fill the room. Jude had definitely moaned. There was no helping it as Brandon’s fingers splayed and glided across his chest. They drifted lower, over the ridges of Jude’s stomach and he cursed silently as he felt his balls pull tight. Jude placed his hand over Brandon’s and he forced his eyes open and found Brandon’s.
“Please, tell me this is doing something for you because it’s killing me.” Jude’s voice came out thin and gravelly. He’d never felt more turned on and he was on the verge of embarrassing himself. Jude was so close, he’d probably come if Brandon breathed too hard. Brandon nodded and Jude made the mistake of staring at his mouth just as Brandon’s tongue swept across his lips. “Oh, fuck…” Jude squeaked as his body tightened. Brandon’s brows pulled together in confusion and he looked at Jude expectantly. Jude licked his own lips, trying to make his mouth less dry and functional. “Your mouth…” He stared at Brandon, silently pleading with him to understand. Jude wasn’t sure if Brandon ever could.
“Can I kiss you?” Brandon breathed and Jude felt the words against his lips.
Without any direction from Jude’s brain, his hand slid around Brandon’s neck and cupped his head as it swiftly pulled Brandon’s face to his. Jude's eyes flared as his lips collided with Brandon’s and lightening burst from where they connected and swept through his body. Brandon’s lips opened on a gasp and Jude’s tongue surged into Brandon’s mouth. He felt Brandon’s tongue slide tentatively against his and Jude was lost. He angled his head and his tongue twisted and explored Brandon, learning the various textures and tastes. Jude felt Brandon’s hand gripping at his waist, pulling him closer and he groaned against Brandon’s tongue as he felt the hard heat of Brandon’s erection through silk. Jude was barely aware of his own hand gliding down Brandon’s back and his body started to roll over Brandon’s and he froze. Everything was happening too quickly, they were losing control. Overwhelming Brandon when he was just learning that he found men attractive wasn’t a good plan. Jude pulled his lips from Brandon’s and took a deep, ragged breath.
“Too fast,” Jude panted as he rolled onto his back. He covered his face with his hands and urged his body to relax.
“Jude,” Brandon sighed his name and it was all the warning he had before he felt Brandon’s body press against his side and a hot hand slide down his stomach.