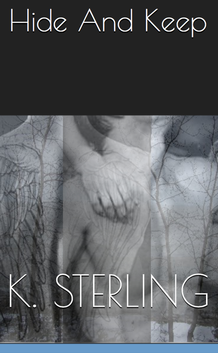 Hide And Keep is still my favorite, among all of my books. I don’t know if I’ll ever be able to top Aiden Sharp. He’s very complex and poor Lane doesn’t know what to make of him, or what to do with him. Aiden knows exactly what he’d like to do with Lane. Hide And Keep is also my readers’ favorite and I have plans for a short featuring Aiden and Lane at the end of December, as a holiday Thank You for the amazing support I’ve received this year.


Aiden is full of surprises. Lane learns quickly that he might have underestimated him.

“I promise you, Lane has been a very generous host.” Both Clark and Lane turned toward the stairs and watched as Aiden lazily tied the strings of his pajama pants and offered Clark a drowsy grin. He was still shirtless and had perfect bed hair. Despite his irritation with Clark, Lane was temporarily mesmerized by the way the muscles of Aiden’s stomach bunched and stretched as he offered Clark his hand.
“You must be Clark Cabbot,” he said brightly. Clark’s eyes were wide and his face had a pink tint when he eventually accepted Aiden’s hand.
“You’re Dr. Sharp?” His voice broke and Lane sucked his lips in to keep from laughing. Aiden nodded.
“Yes, but call me Aiden. I don’t like when people call me Dr. Sharp,” he said. Clark blinked stupidly at Aiden.
“Ok.” His eyes flicked to Lane’s and he frowned before he looked back at Aiden. “I just stopped by to make sure you got in all right,” Clark lied. Aiden offered him a wide smile.
“Yup. Had an uneventful trip and Lane has made me feel very welcomed.” Aiden winked jauntily at Clark as he walked past him and came around the counter. He slid behind Lane and looked over his shoulder into the pan. “Looks like he’s going to spoil me,” Aiden teased as his hand closed over Lane’s hip and he rubbed his cheek against Lane’s. Lane saw Clark’s eyes flare but he was more distracted by his now urgent erection and the wall of heat behind him. He cleared his throat.
“Did you sleep well?” Lane asked and tried to look competent as he pulled the bacon from the pan while Aiden was pressed against his back. He heard a soft chuckle and goosebumps spilled down his back.
“I slept like a rock. I was exhausted,” Aiden replied and Lane was sure he could hear Aiden winking at Clark. He felt Aiden’s hand slide around his waist and brush across his stomach. Lane couldn’t stop his eyes from closing but he successfully swallowed the soft moan that tickled his throat. Oh, that’s really nice, Lane decided and opened his eyes. Aiden’s head swung to Lane’s other shoulder and he pressed a quick kiss to Lane’s neck. “You smell really good,” Aiden whispered. Lane felt the words against his ear and heat rolled through him and his lips curved into a shy smile before Aiden stepped past him and reached for the juice. He poured a glass and took a long drink as his eyes darted between Clark and Lane. “Is he joining us for breakfast?” Aiden asked. Lane shook his head.
“No. He’s leaving,” he said as he looked at Clark. It was obvious that Clark didn’t enjoy the display of affection or what he was imagining. Or that they were both dismissing him. Lane gave him a sarcastic smile. “You don’t want to be late. Don’t you have to take the family to church, Clark?” He asked as he went around the counter and didn’t bother to hide the obvious tenting of the front of his pants as he guided Clark toward the door. Clark frowned over his shoulder at Aiden.
“I’ll see you tomorrow, Cabbot,” Aiden said as he waved. Clark’s jaw twitched angrily as he looked at Lane.
“I’ll call you later,” he said under his breath as Lane pulled the front door open. Lane shook his head as Clark passed him.
“Don’t bother, I’ll be busy.” Lane winked as he slowly shut the door in Clark’s face. He laughed softly and scrubbed a hand over his face before he turned and went back to the kitchen. “What the hell was that?” Lane asked as he went to the stove. Aiden shrugged as he leaned against the counter.
“He sounded like an asshole and he wasn’t getting the message. I thought I’d help you,” he offered before he finished his juice. “So, you and Clark Cabbot?” Aiden asked as he poured himself another glass. Lane raised a shoulder as he made their plates.
“It was just sex,” he said as he looked at Aiden. “Do you like pancakes and bacon?” Lane asked and Aiden laughed.
“I have Asperger’s. I’m not a member of Al Qaeda or a Communist,” he explained as he took his plate from Lane. “I love pancakes and bacon. And syrup. It’s one of the few condiments I like,” Aiden said as he went to the table. Lane smiled as he set down his plate.
“Do you want some coffee?” He asked as he went for the syrup and the juice.
“I can’t drink coffee. It makes me see sound,” Aiden said as he greedily munched through a piece of bacon. Lane’s eyes grew large.
“Of all the things you’ve said to me, that might be the most strange and offensive,” Lane said and Aiden’s eyes snapped to his and he looked worried. “I’m kidding. But how can you not like coffee?” Lane asked. Aiden shook his head.
“Caffeine makes my skin hurt,” he said as he reached for the syrup. Lane couldn’t stop his eyes from sliding over Aiden’s chest at the mention of skin. God, Lane was hurting.


But it’s really about what Lane does to Aiden…


It was all too much. Aiden never understood what other children felt on Christmas morning, he’d never felt the giddy joy and excitement. As he stared at Lane and felt a wave of intense, glowing warmth crash through him, Aiden believed he’d tapped into a dozen children’s Christmas joy. It was surging through him and choking him. Aiden’s nose burned and his eyes stung as they blurred. A loud noise clawed at his throat and his chest felt like it was expanding too far. Aiden jumped to his feet and ran for the stairs. He climbed blindly and before he realized what he was doing, he slammed Lane’s bathroom door shut and fell against it. Aiden’s chest heaved as he slid to the floor and tears streamed down his face like drops of lightening.
“Aiden?” Lane’s voice was gentle and patient and Aiden searched for an explanation for how he came to this time and this place, with this man.
“I just need a few minutes.” Aiden’s voice was weak and watery. He cringed as he untucked his shirt. He needed to get his courtroom clothes off. They felt heavy and soiled with all the words he’d said about Jonathan Burgess.
“I’m sorry if you feel trapped. I just… I’d never forgive myself if something happened to you and I wasn’t there to protect you,” Lane explained. His voice was lower, he was sitting on the other side of the door. Aiden squeezed his eyes shut as more Christmas morning warmth swelled within him and wet heat slid from his eyes.
“I don’t feel trapped, Lane,” he whispered.
“Are you scared?” Lane asked and Aiden shook his head.
“For the first time in a long time, no. I actually feel free, like I’m living right now.” He pulled off his tie and began unbuttoning his shirt.
“Then why did you lock yourself in my bathroom?” Lane sounded like he was smiling. Aiden sighed as he let his head fall back against the door.
“I’m overwhelmed, I needed some insulation. Being here with you is like heaven. I don’t think I’ve ever been happy like this.” Aiden tried to make his eyes stop crying as he pulled off his shoes and socks. He heard a soft laugh and it tickled in his chest.
“This is the kingdom of grilled cheese sandwiches and sex,” Lane teased and Aiden smiled as he unbuckled his belt.
“It’s more than that. You’re perfect and patient and it’s so quiet and comfortable here. And there were pancakes. I really love pancakes, Lane.” Aiden heard another laugh and he didn’t want it to stop. He unzipped his trousers and raised his hips as he slid them off.
“Why did all of this overwhelm you?” Lane asked carefully. Aiden slid his shirt off and pulled his undershirt over his head. He sighed as the cool air of the bathroom wrapped around him.
“I was so tired, Lane. When I came here, I didn’t think I could do it anymore. All of the running, the hiding, the messages and sleeping on hard pleather couches or folded up in office chairs… I wanted it to end. I just couldn’t handle it anymore. I thought the International House of Pancakes would be a good place. That way, my last meal would be pancakes,” he confessed.
“Jesus, Aiden,” Lane gasped.
“I haven’t felt like that since I met you. I got a little scared downstairs when I thought about leaving and going back to my life. I knew this couldn’t last forever but I wasn’t ready for it to end so soon. Then, you said that I was staying and it felt like a miracle.” Aiden heard Lane get to his feet.
“Can you come out now?” He asked. Aiden got to his feet and frowned when he saw his reflection in the mirror. You’re kind of a pervert, right now, Aiden decided.
“Umm… I had to get out of my court clothes, they were making me very uncomfortable,” he said as he pressed his forehead against the door. “I’m naked,” he admitted.
“So, you’re telling me you’ve had a head start? Come out and help me catch up,” Lane ordered.