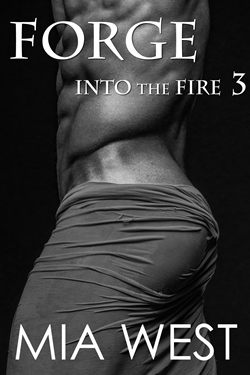 Marc reined in his horse to check the wagon one last time.

He did so subtly, pretending to inspect the vehicle’s wheels. If the other men on the patrol had noticed how many times he had inspected the wheels in the last three days they hadn’t said so, but he didn’t need the ribbing. What he needed was to get home, show Wolf what he’d brought him, and then get him alone to celebrate.

Preferably in the newly refurbished baths. Marc was still getting accustomed to patrolling on horseback, and his entire body ached.

He grunted at the hub of the rear wheel below him—just as sound as when he’d checked it two hours before—and then glanced at the large shape on the wagon bed, covered with a wool blanket. It had required three men to load, and rode now on its side, solid with promise.

Marc spurred ahead again. They were only about two miles from the stronghold. At one mile the old sentry waved to them with a grin.

He greeted them with the same question at the end of each patrol, and well he might: the brazier warming his feet on this cold, damp day had come back on their wagon two months before. Marc nodded to him as the other men described their haul, and then trained his gaze ahead.

The wall came into view after a quarter-mile. Through the bare trees it appeared solid, but Marc knew they would need another few weeks to complete it, more if the weather remained wet. It had been Marc’s first priority when the compound’s residents had voted him de facto leader of their defense efforts. Upon its completion, he would insist on a second wall outside the first. He hoped they could finish it before summer and the greater number of raiders who would take advantage of warm weather to make mischief.

Finally, the entry gate came into view, and Marc felt the same two things he always did when he returned from patrol: a rumble in his belly at the prospect of a hot meal cooked by someone else, and a stir in his cock in anticipation of seeing Wolf again. This trip had been fairly short at one week, but as he waved to the men and women working on the wall, he considered skipping the meal and the bath to drag Wolf directly to their upstairs quarters and the wide, warm bed waiting there.

But his smith wasn’t among the people who met them, so Marc took the time to give a brief report. They had traveled due southeast as far as four days took them. They’d met with no skirmishes—no people at all, except for a few who fled from the sight of their horses and light armor. They’d found a few ruined buildings, looted or fire-gutted or both, but had managed to collect a wagon full of supplies nonetheless.

Philip lifted the blanket to peer at Marc’s prize. “I can see why no one had bothered with this yet.” He raised a dark brow at Marc. “He’ll be pleased.”

Yes, he would, and judging by the ring of Wolf’s hammer from beyond the corner of the villa, the smith hadn’t heard them return.

“May I tell him, Master Marcus?” cried Drustan. The young boy looked ready to run for the smithy.

Philip clamped a firm hand on his shoulder. “It’s not your gift to give.”

“Next time,” Marc told the boy and, nodding his thanks to Philip, headed for Wolf’s workshop.

They had built it away from the main villa to minimize fire risk. It stood against the inside of the inner wall, snugged up to the stone. The smoke rising from the chimney had become one of Marc’s favorite scents, since it often clung to Wolf’s body, waiting in his hair or the crook of his neck for Marc to discover it.

The smith stood at his anvil, his back to the open side of the wide shed, and Marc took a moment to silently admire him. Broad, muscular shoulders filled out his shirt, whose sleeves he’d rolled up to his elbows. His hair, always tied back in the smithy, fell to the strings of his leather apron. His torso narrowed slightly to his hips, his strong buttocks apparent under his breeches as he shifted from forge to anvil to quenching pail.

As attractive as Wolf was, what warmed Marc even more was the capable ease with which the smith moved as he worked. This was where Wolf was most comfortable, most himself, hefting iron and hammer, and Marc was grateful to his gods for bringing them safely across Gaul to this place. That Marc had had more than one hot dream of Wolf fucking him in the smithy only added to the warmth he felt just now. He rapped his knuckles on the post next to him.

Wolf turned, eyebrows set in the stern expression he wore when he worked (another feature of Marc’s dreams), but when he saw it was Marc who’d interrupted him, he quickly set down his work. Crossing the space in a few steps, he took Marc’s face in his hands.

“You’re back,” he said as he always did, in a growl tinged with relief, and kissed Marc. He tasted faintly of the ale one of the women had probably brought him midday. Marc savored it, but only a sip. He drew back after a few seconds and wrapped his fingers around Wolf’s plaited beard. Gave it a light tug.

“I brought you something.”

Wolf’s eyes glinted, and his big hands slid down to grip Marc’s ass. “I saved you something.”

Marc laughed. “Good. But I have something else for you first. Come see.”