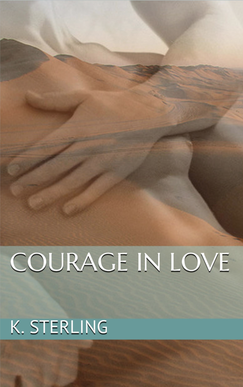 Courage In Love is a more personal book for me. I grew up moving from state to state and country to country because my father was in the Army. Then, I went into the Army and met and married a boy that was also in the Army. I’ve been a soldier and an Army wife. Some of the places, conversations and experiences are from my own life and there are similarities between Ross and Parker’s courtship and my personal love story. Unlike Ross and Parker’s, dating apps weren’t around when I met my hero so I decided to see what would happen if you actually found love on Grindr.

Of course, our hero is old-fashioned and needs a little convincing. And sometimes, our friends know what we need better than we do, though we may not see it at first.


Oh, the morning after…

“This is good.” Ross said as he raised his mug and Parker nodded as he tried to find something to keep the silence from getting awkward.
“So, do you want some breakfast? I don’t really have anything here so we’d have to go out. I’m not much of a cook,” Parker admitted and Ross chuckled as he stared into his mug.
“I don’t cook either,” he said softly before he cringed. “I’d love to go get breakfast with you but I can’t.” Ross looked up at Parker apologetically and disappointment swelled.
“That’s cool. I’ll give you my number, you can call me if you want.” Parker chewed on his lip and tried to look relaxed as he stared into his coffee. When he looked up, Ross’ head was cocked and his brows were pulled together as he stared at Parker.
“If I want?” Ross asked slowly and Parker nodded. Ross set his mug down and reached for Parker. “I’m definitely going to call. I don’t want to go, Parker.” His voice was deep and velvety as he wrapped his arms around Parker. “I’m going for breakfast with Bryan and Ian. Bryan’s sister’s visiting and it’s her last weekend before she moves to Portland. I have to be there,” Ross explained and relief flooded Parker. He knew Ross was telling the truth. Ross’ head snapped back and he smiled. “Why don’t you come with me?” He asked and Parker started to nod as his eyes went to the clock. His heart sunk.
“Shit. I almost forgot,” he complained. “I can’t. My department is meeting for lunch at 11:00.” Parker rubbed the back of his neck and shook his head. “I can’t cancel. I’ve missed the last few because I was feeling sorry for myself. I promised I’d go today. I didn’t realize how late it was.” Parker saw Ross’ lips tilt and he shrugged.
“Fine. Then, I’ll see you tonight,” he declared and warmth burst in Parker’s chest. “I want to take you out to dinner. When can I pick you up?” Ross asked before he lowered his head and nibbled at Parker’s lips.
“I can be ready whenever,” Parker mumbled as he pulled Ross closer.
“I’ll make reservations and let you know.” His tongue slid along the seam of Parker’s lips and he angled his head as his tongue slipped between Parker’s lips.

“Is this alright?” Ross asked as he held the door open and Parker slid his hand around Ross’ back as he passed.
“This is great. I love The Ivy Inn,” Parker assured Ross before he turned to the hostess.
They were shown to their table and Ross looked unsure about where to sit. Parker waited until Ross sat and pulled his chair closer before sitting.
“Is this ok, or would you rather I moved back?” He asked and Ross shook his head and blushed. Parker loved how nervous Ross was. It made him feel less like a geek for being such a mess.
“That’s perfect,” Ross said as he covered Parker’s hand with his. “I wasn’t sure if you would be comfortable with us looking so obvious,” he explained and Parker shrugged.
“I have nothing to hide and I certainly wouldn’t mind someone I know seeing me on a date with a seriously hot guy.” He winked as he leaned closer and Ross shook his head.
“Unfortunately, you’re stuck with me for the night.” His grin was crooked and Parker rolled his eyes. “As long as you’re comfortable. You’re the one that lives and works here,” Ross said before he looked up and smiled at the waitress. He ordered a beer and Parker asked for a cape cod. “I’d like to start with the shrimp and grits and then the bison hanger steak, please.” Ross’ bashful smile flustered the waitress and she tried to cover it with a cough before she turned to Parker.
“The fig toasts and the quail, please,” he said and she blushed as she took his menu. Parker kept a straight face until she left then he laughed softly as he looked back at Ross. “Poor kid,” Parker said as he placed his hand on Ross’ thigh, under the table. Ross tilted his head and Parker felt his breath against his cheek.
“Marissa said that it’s practically impossible for women to look at an attractive gay couple and not imagine them having sex. She says that it’s a huge turn-on for some straight women,” Ross explained and Parker nodded thoughtfully as he watched their waitress take an older couple’s order. She looked completely composed and competent. He bit his lip as his hand drifted higher, toward Ross’ groin.
“I guess I can’t blame her. If she’s imagining anything close to what happened last night and this morning…” Parker let his fingernails drag down Ross’ thigh. Ross shifted in his seat and Parker heard a very weak groan rattle in Ross’ throat. He swallowed loudly before he took a long sip of beer.
“If you keep that up, I’m going to have to find an excuse to carry this table out of the restaurant when we leave,” Ross murmured. Parker wasn’t sure what had gotten into him but his hand glided slowly back up Ross’ thigh. Ross’ eyes got wider, the closer Parker’s hand got to his erection and they felt like they might fall out of his head when Parker wrapped his hand around the bulge in Ross’ trousers. “Please don’t make me have to orchestrate an accident to cover a stain on the front of my pants,” he whispered and Parker felt his own getting tighter.
“I’m sure it would take a lot more than this,” Parker said under his breath as his hand slid up and down Ross’ length. Ross swallowed and shook his head.
“With you? Not really,” he admitted and Parker stifled a shiver of excitement. “If you don’t behave, we won’t make it through dinner,” Ross warned.
“You know, you didn’t have to take me out. I would have given it up,” Parker teased and Ross narrowed his eyes at him.
“I’m hoping you’re not just pretty and easy,” he murmured. Parker’s jaw fell and Ross laughed as   he leaned close. His lips brushed against Parker’s ear and he suddenly felt overdressed as heat swept through him. “I like that you’re easy but I want to learn more about you. And your voice drives me crazy.” Ross’ eyes were dark and deep when they found Parker’s. “Talk to me, Parker. You could tell me just about anything and I won’t be able to stop thinking about getting you naked.” Ross reached for his beer and Parker squeezed his thigh, mostly because he had to grab onto something to keep from sliding out of his chair and onto the floor into a puddle of sexually frustrated man.
Parker did his best to engage Ross and keep the conversation flowing. Ross’ eyes were constantly flicking over Parker’s face and watching his hands as he talked and ate. Parker felt like he was being studied and analyzed. Every now and then, Ross’ fingers would caress Parker’s as they rested on table, as if Ross needed to maintain contact. Once again, Parker was impressed by Ross’ intelligence and the wide range of topics he could discuss with confidence. As they shared the trio of creme brûlées, Parker decided that Ross’ body, crooked cocky grin and chiseled face weren’t his sexiest features.
“I think it would be a good idea for us to get out of here. Now,” Parker warned as he licked his spoon clean. Ross’ eyes clung to Parker’s mouth as he pulled his wallet out. He opened it and his eyes glanced quickly as he removed a generous amount of cash.
“Let’s go,” Ross growled as he tossed the money on the table and stood up. Parker nodded and laughed when Ross’ hand closed around his wrist and almost pulled him off his feet as he dashed toward the exit. They were almost to the door when Parker looked over his shoulder and saw their waitress staring longingly as she watched them go. He offered a sheepish grin and she turned bright red.