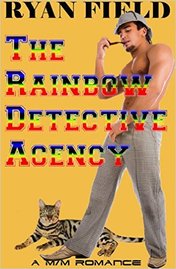 After a long, hot soak in his garden tub, Proctor jumped into the shower and shaved his legs, armpits, and all visible pubic hair. It had been the worst morning of his life. His personal chef had taken a tantrum and quit, almost destroying the entire kitchen. His most recent lover had run out the back door in his underwear. Proctor's personal assistant, Jane, had informed him all the checks he'd been writing for the past few weeks had been bouncing. And now he was on his way to see his attorney to get some answers.

He styled his hair to make it look messy. He spritzed a ﬁne, even coat of the best spray tan money could buy all over his body and dabbed it gently with a black towel. He didn't want too much spray tan; there was a ﬁne line between too much, not enough, and just the right amount. He'd had special lighting installed in his white marble bathroom so he'd never make any mistakes with spray tan.

When he came out of the bathroom, he put on casual jeans that had cost him sixteen hundred dollars at a boutique on Rodeo Drive in Beverly Hills. He'd only worn them once. Over the jeans, he wore a white Armani dress shirt and didn't tuck it in. His shoes were brown Gucci loafers, without socks. The only jewelry he ever wore was one of a dozen expensive watches. Today, he chose the Rolex.

When he went downstairs, he noticed the mess his high strung chef had made was all cleaned up and Jane had lined his rock crystal collection up in neat little rows on a mirrored table in the center hall. It didn't look like any of the rock crystal was broken, not even the tall obelisk with malachite trim. They didn't look bad on the table either. Jane was his lifesaver, not just his personal assistant. He didn't know how he would be able to survive without Jane if she decided to quit. How she'd managed to clean up the mess and move the broken cabinet out of there so fast was anyone's guess. It would have taken Proctor the rest of the day just to pick up the rock crystal and line it up on the hall table.

He glanced down and smiled. His large spotted cat named Constance was sitting beneath the mirrored table, watching every move he made. For a Bengal cat, she wasn't as aggressive and lively as he'd hoped she would be. And she was only three years old. She tended to sleep too much, eat too much, and she couldn't have cared less about going outside. A bird could land on her head and she wouldn't have ﬂinched. She was timid, too. The slightest noise out of the ordinary sent her sailing under a table or into a corner. His friends said he was lucky she was so calm and serene; they said he shouldn't complain. Some Bengal cats could be rambunctious. But he wanted a domestic cat with the personality of a wildcat, not a big old lazy hound dog that was afraid of her shadow. Once in a while, if Constance disliked someone intensely, she would hiss and growl at them. But that didn't happen often.

He bent down and patted the top of her head, and she purred. "Don't worry, sweetie. You're no lion, but I love ya just as much. Where's Jane? I don't see her anywhere." He often talked to Constance as if she understood every word he said. Sometimes, if she glanced at him in the right way, he thought she really did.

As he said this, Constance looked up and Jane said, "I've been out back getting rid of the cabinet. I took it apart and I'll put it out on trash day. I phoned your attorney and you have an appointment in an hour."

"An hour?" That didn't give him much time to get into town and stop by his business manager's ofﬁce. He'd been expecting to have at least two hours. "I made the appointment two hours ago," Jane said. She sent him a sarcastic look and frowned. "I didn't know it would take you that long to get ready."

Proctor smiled and crossed to the hall closet. He was used to her sarcasm by now. He pulled out a Louis Vuitton men's satchel and reached inside for his car keys.

Before he had a chance to ask about the car, Jane said, "I brought the Mercedes around. It's out front."

Proctor smiled and walked to where she was standing. He hugged her and said, "I don't know what I'd do without you. Please promise me you'll never leave."

Jane lifted an eyebrow and shrugged. "I'd just like to get paid."

Proctor waved his arm and turned to the door. "I'll straighten it all out this afternoon. I'm sure there's nothing to worry about."