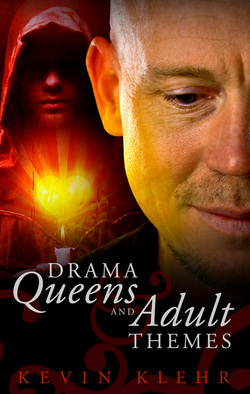 “My darlings, listen to yourselves. You are one of the most ‘together’ couples I know, gay or straight. But all it takes is this little play-bunny to enter your lives and you both act like Pepé Le Pew pining after what you can’t have!”

This was the most stern she had ever been with us. She loved us to death so I guess we were the last people on earth she wanted to see hoodwinked by some wholesome-acting vixen.

Our friendship with Maude was based on openness from day one. She cast us in a play she was work-shopping at the theater group, and we were instantly drawn to her unapologetic spinster status. She took one day at a time, appreciating her posse, never wanting to complicate her life with just one companion. Wade seemed to study her like a poker player weighing up his next move.

“I love you, Maude, but trust us, you’ve got the situation wrong.”

“Have I, Wade? You still know little about him.”

“We’ve met up with him a couple times.”

“And tell me, boys, has there been any flirting?” We didn’t answer. “I rest my case.” She opened the pantry door where she’d stashed more bottles of red. “I think it will take another few glasses for me to talk sense into you.”

Before any debate could be entered into, she unscrewed the top and poured. Although Wade expressed concern about driving home inebriated, I welcomed the top-up, even if it was close to midnight with a work day ahead. The crisp raspberry-like scent enticed our palettes.

“Right, my sweethearts, a little perspective. After you met him, Adam, when did you next catch up?”

“We went for a drink that night.”

“Uh-huh. You chat. You like each other. Then who contacts who?”

“We invite him around for dinner,” I answered.

“Pretty quiet,” said Wade. “We had dinner, chilled out, then he had to go home to his flatmate as something was wrong.”

“Uh-huh. What happened?” Again, we didn’t answer. “You actually don’t know, do you? You never thought to ask. Are you actually sure this guy has a flatmate, or is it a boyfriend?”

I searched my wine glass for an answer. No mystic visions appeared. Now I knew I was tipsy. Thankfully, Wade was my designated driver.

“And do you get the feeling he might be interested in one of you, more than the other?”

“Oh definitely not,” Wade said. Like me, he also studied his glass for an answer. “He’s taken an interest in both of us, and yes, now that I hear myself say it, it is a bit bizarre, but trust me, Maude, there is no ulterior motive.”

“Maude,” I added, “I appreciate your concern, but trust us, there’s nothing sinister going on here. Just a bit of mutual infatuation, nothing more, nothing less. We’re grown men. We’re not about to do anything foolish.”

“Adam, we’ve all witnessed too many couples split up when a touch of spice was added, as you know. I’m determined not to see the same thing happen to my closest buddies. Besides, the politics of who to invite to what occasion is something I don’t want to go through again.”

“Remember when I told you about the time I accompanied Jean and Simon to the circus and witnessed the trapeze artist flirt with Simon. They ended up running away together to live on a farm, while Jean took on the arduous hobby of stalking. First the letters, then the phone calls, followed by those crazy ticking gifts. I don’t want to be meat in the sandwich again, and I’m determined not to see my boys split up.”